We are currently ONLINE ONLY.
Questions?  Call (505) 821-2739
CLICK for Gift Cards
Free shipping on orders over $75
Shop online for easy curbside pickup!
Together, we’ll get through this.
Read more about our efforts.
Home > Fabric > Themed Fabrics > Holiday Fabrics > Fourth of July and Patriotic > Old Guys Rule Denim Cars 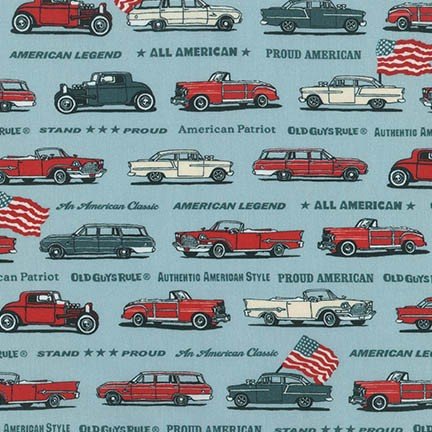 
History of Old Guys Rule
A Badge of Honor:
Old Guys Rule was created to embrace a new breed of guys who have incredible energy, a passion for life, wisdom gained from years of experience and the time to spend doing the activities they enjoy. Old Guys Rule should be worn as a badge of honor for a life well-spent, but not nearly over.

History:
When Don Craig asked a friend to make the first Old Guys Rule bumper sticker to honor his dad, he didn't realize what he was starting. Don grew up in Hermosa Beach in the 50's. He learned to surf from his father, Doug, who was president of the San Onofre Surf Club and a hero to Don and his childhood pals. As Don and his buddies matured, they came to appreciate the wisdom and counsel of Doug and his friends, Ross McAdam and Fred Casserio. In Don's circle, these elders became “The Three Wise Men”, mentoring younger surfers, dispensing wisdom and supporting their aspirations. By the 60's, Don was a well-regarded member of the surfing community. He competed for Bing Copeland, Dewey Weber and the Jacob's Surf Team. He also worked in the surf industry, initially as Quiksilver's first sales rep and later for many other popular surf brands.  Don introduced Rip Curl to the U.S. market and successfully opened and ran the first U.S. Rip Curl retail store. In early 2003, Don had some stickers made as a tribute to his dad and the two other “Wise
Men”.  The first bumper sticker design was a surfboard running through the stacked words, Old Guys Rule.  Within a week, other guys at the beach were asking for a copy of the sticker, as did some of the surf shop owners to whom Don sold product.  Sensing a business opportunity, Don trademarked the phrase, “Old Guys Rule,” and began selling t-shirts, stickers and hats bearing the slogan to stores.

Shortly after the company’s launch into retail, Don realized that the “Old Guys Rule” motto extended beyond the surfing community to men from all walks of life who see age as a “Badge of Honor,” not an impediment. The once local t-shirt company evolved into a lifestyle brand with apparel and accessories that speak to men from around the world with passions ranging from surfing, golf and grilling to hot rods, motorcycles, sports, and more.

Click here to stay up to date on the freshest fabrics, latest sales,
classes, new products, and events.